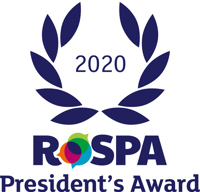 The awards scheme is the longest-running of its kind in the UK. It attracts 2,000 entrants from around the world every year, making it one of the most sought-after global accolades in health and safety. Organisations receiving this award are recognised as being world - leaders in health and safety practice.

Ground Control has received the prestigious and longest running honour of its kind, ROSPA President’s Award after being awarded 10 consecutive Gold Medals for its incredibly high standards and performance in Health and Safety.